To celebrate the partnership with McLaren racing, Formula 1 driver Lando Norris visited AkzoNobel’s manufacturing site at Sassenheim in the Netherlands - the home of the Sikkens brand and production of McLaren’s iconic livery colors Papaya Orange and Foster Blue, prior to the Zandvoort GP Formula 1 race in September.

Employees wore custom T-shirts and cheered for Lando Norris upon his arrival. Lando was given a short tour of the company and it gave many employees the chance to be up close with one of the world’s youngest and most promising F1 drivers. During a Q&A session, AkzoNobel employees also had the chance to learn more about Lando and what it takes to be a F1 driver.

As Official Paints and Coatings Partner, AkzoNobel is providing its Sikkens vehicle refinish products for all painted parts of the MCL35M, as well as the team’s transport, garage and accessories. McLaren Racing’s 2021 Formula 1 car will again feature AkzoNobel’s high-performance coatings, following an extension to the long-standing partnership which debuted in 2008. In addition, the company's Marine and Protective Coatings business is also supplying Intertherm 50 heat-shielding from its International product range for critical components surrounding the engine and exhaust for the 2nd year in row, first applied in 2020.

Since 2008, AkzoNobel has been supplying its Sikkens coatings to the McLaren Formula 1 team. Sikkens coatings have been used on McLaren Formula 1 race cars for over a decade, with the MP4-24 being the first car to sport the newly developed silver-chrome finish for the 2009 season. On the long-standing partnership, Patrick Bourguignon, Director of AkzoNobel’s Automotive and Specialty Coatings business says, “The McLaren F1 team’s spirit and dedication to success inspires us in our endeavor to continue delivering the best products and services to all our customers.”

Did you know?
In 2012, the partnership between AkzoNobel and McLaren has been extended from F1 to McLaren automotive. Since then, the company has been supplying paint for the production line of all McLaren GT road cars. 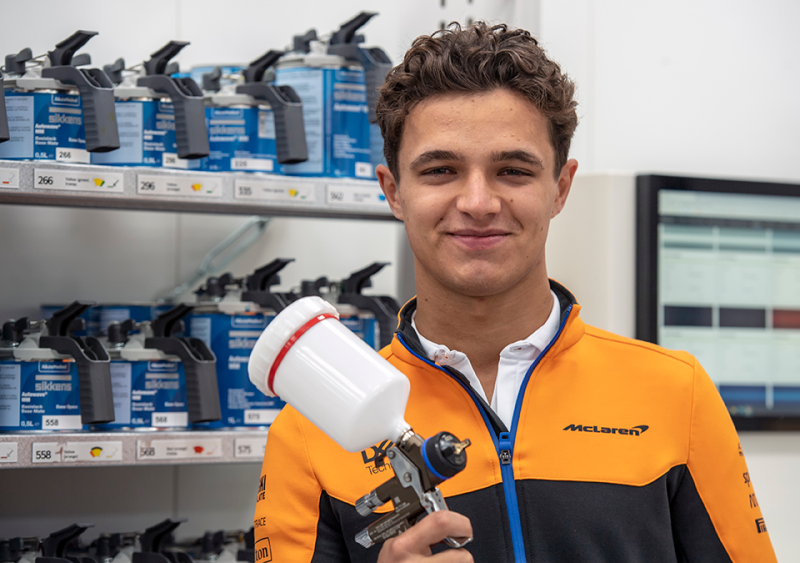